An average of three recent opinion polls (here, here and here) shows that the Bharatiya Janata Party (BJP)- and Janata Dal (United)(JD(U))-led alliances are locked in a statistical dead heat in the 2015 Bihar state election. 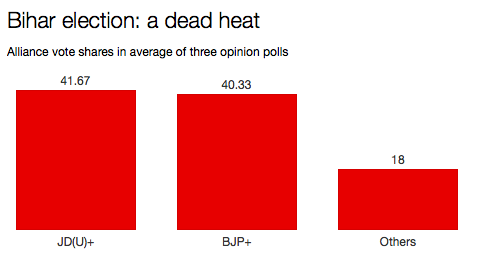 This is a very creditable performance for the BJP. The party was long overshadowed by its partner of two decades, Nitish Kumar’s JD(U), even though it played a crucial supporting role in bringing upper caste votes to the alliance. Today, it appears to have fought Bihar’s two dominant parties to a standstill, and could yet form a government with its political allies. Indeed, the formation of a “grand coalition” (महागठबंधन) by the JD(U), Rashtriya Janata Dal (RJD) and Indian National Congress (INC) could ironically elevate the BJP to political primacy in Bihar, as Yogendra Yadav argued in a recent TV interview.

But it won’t be easy for the BJP to overcome the grand coalition’s raw arithmetic power. At the height of the Modi wave in the 2014 general election, the BJP and its allies outpolled the combined votes of these three parties in only 85 of 243 assembly segments. Most of these lay within 11 Lok Sabha constituencies where heavyweight BJP alliance candidates were contesting. The corollary: the then-hypothetical grand coalition “won” 158 assembly segments.

The big change since then is that the RJD and INC are now in alliance with the JD(U). So why does the race appear to be so tight? One theory is that disaffection with the RJD and Lalu Yadav will encourage many JD(U) supporters who might otherwise have voted for Nitish to switch to the the BJP. Furthermore younger and more educated Yadavs are also said to be weighing support for the BJP, which means that the RJD could also lose votes to the BJP.

Who knows, right? Well, not quite. We have a test of this theory in ten state by-elections fought in August 2014, only three months after the general election. The main difference was that the RJD+INC and JD(U) fought separately in the general election, but presented a unified front in the by-elections. A comparison of vote shares in the two elections gives us an opportunity to gauge the effect of the grand coalition.

So what happened? There was a swing of 2.1% towards the JD(U)-led front and a swing of 6.2% away from the BJP alliance (using simple averages). The BJP and its allies won four assembly seats and the JD(U) alliance took six. This would seem to show that the unification of the RJD, JD(U) and INC had a (weak) positive effect, while the BJP lost substantial vote share compared with the general election, only three months later. If this is a foretaste of how the grand coalition might fare against the BJP, the latter has much to be concerned about.

There are, as usual, caveats. This measure is imperfect because (1) issues and candidates differ between national and state elections and (2) ruling parties tend to win by-elections about two-thirds of the time because voters like their constituencies to receive favourable treatment. This means that any alliance effect — political contradictions that forced some RJD and JD(U) voters into the arms of the BJP — could have been hidden in the by-elections by such an incumbent effect. Furthermore, ten is admittedly a small sample in a state that has 243 assembly constituencies, although as the map below shows they were reasonably diversified in geographical terms (156-Bhagalpur in the southeast seems to not have been properly highlighted). 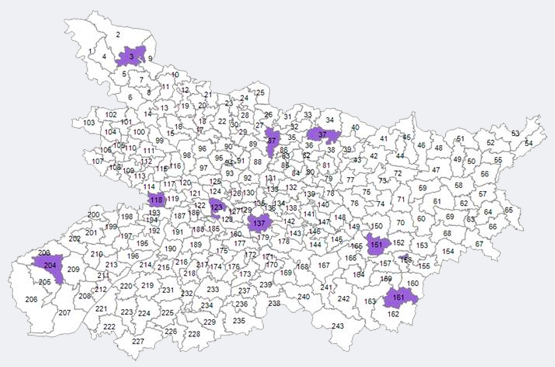 Most importantly, of course, there was no chance that the by-elections would result in a change in government, whereas the BJP and its partners present a credible alternative in the state election. So a BJP wave or the move of key swing constituencies towards it (be they Mahadalits or Yadavs) could still produce victory for the BJP. However, the recent historical record and the sheer quantum of votes available to the JD(U) and RJD suggest this won’t be so easy.