Every time there is a terror attack in India, whether Mumbai (2008) or Pathankot (2016), some commentators demand “action”, usually a call for India to take the battle to the Pakistan Army and its insurgent proxies. This would presumably mean Indian agencies launching similar strikes at these groups and deterring future terror attacks.

Defence Minister Manohar Parrikar appeared to support this line when he stated on 11 January that any “individual or organisation” that harmed India “should also receive the pain of such activities… how, when and where should be your choice”, though he clarified that he thinking aloud rather than formulating government policy.

#ExpressFrontPage | Manohar Parrikar: Those who harm us must experience the same pain https://t.co/y8DzlkTbDB

One frequently cited example of this approach is the Research and Analysis Wing (RAW)’s Counter Intelligence Team X (CIT-X) that is said to have carried out “retaliatory attacks in Lahore, Multan and Karachi” in the 1980s, which the former RAW officer B Raman credited with “putting an end to the ISI’s interference in Punjab by making such interference prohibitively costly”.

So why can’t India retaliate in a similar manner to terror attacks from Pakistan? There is one inescapable problem: it’s hard, if not impossible, to judge a strategy that is designed to remain hidden. Outside of a small circle of decision-makers, how would anyone know whether a covert Indian programme is being implemented, let alone if it’s working?

This problem of identification is magnified by the fact that terror attacks aren’t exactly rare in Pakistan – four times as many Pakistanis died in insurgent attacks between 2010 and 2014 as Indians did, even though its population is about a seventh that of India’s (data from the Global Terrorism Index). 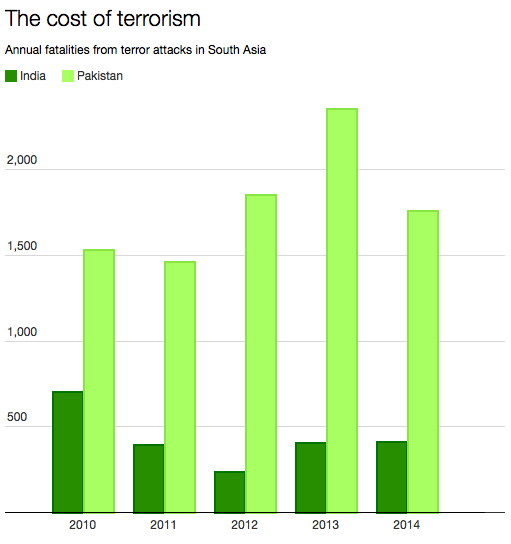 With all kinds of terrorists jostling to blow up stuff in Pakistan, it would be challenging to even identify an Indian attack.

As it is, the Pakistani government frequently accuses India of sponsoring groups like the Tehreek-e-Taliban Pakistan (TTP) via its consulates in Afghanistan. From a Pakistani point of view, the TTP attacks on the Pakistan Army headquarters (2009), the naval base PNS Mehran (2011) and the Kamra air force base (2012) bear more than a passing resemblance to a hypothetical Indian campaign.

Whether this is a figment of Pakistan’s imagination or not isn’t the point. It is that no Indian prime minister will ever say: “Mitron, we’re doing some sick ops in Pakistan, check out this LiveLeak video”. Cynics might think that the Modi government is more than capable of live-tweeting a state-sponsored attack, but I have my doubts.

This makes possible at least four errors of inference:

The lesson? Don’t waste your time calling for Indian “action”.

Unless it makes you feel better.