The Feb 5 daytime killing by AK-47 wielding gunmen of Lok Janshakti Party leader Brijnath Singh, himself a murder accused, has revived allegations that Bihar is witnessing a return to “Jungle Raj”, the period of lawlessness that occurred under former Chief Minister Lalu Prasad Yadav in the 1990s and early 2000s.

The Bharatiya Janata Party (BJP) has attempted to play up voters’ fears of that period ever since Chief Minister Nitish Kumar entered into an alliance with Lalu in 2014; Prime Minister Narendra Modi pitched Bihar’s 2015 assembly election as a choice between “Vikas Raj” and “Jungle Raj”. (In Does Bihar’s kidnapping industry embody “Jungle Raj”? this blog showed that Modi’s claims regarding kidnappings in Bihar were off the mark.)

The latest version of the “Jungle Raj” charge builds in a Jan 3 CNN-IBN news report according to which Bihar had witnessed 578 murders over the previous two months. Although this number is in line with Bihar’s five-year average (as I pointed out at the time), it turns out that the actual number of murders in November and December 2015 was a considerably lower 442. But these details haven’t stopped BJP-leaning social media from criticising the state government for its supposed failures on the law-and-order front.

Nitish accepts there's rise in crime in Bihar,but no jungle raj yet. 600 murders already, how many more need to die? pic.twitter.com/raOXtV3xxP

A proper test of whether Lalu’s return to power in early November 2015 has contributed to a spike requires us to compare murders reported in November and December 2015 with the equivalent period in previous years. This is partly required because there is a seasonal pattern evident, with more murders committed in the summer than in the winter (one possible explanation here).

And this is what we find: 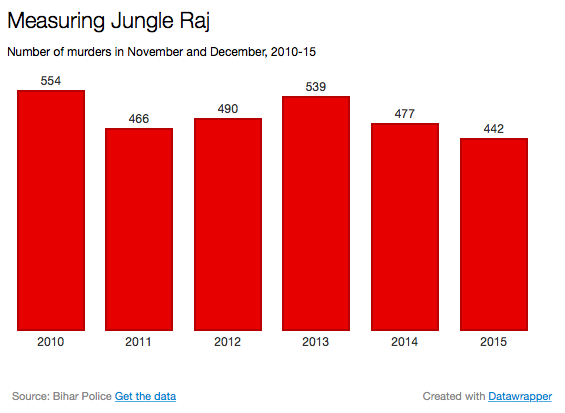 Not only is the number of murders reported in Bihar in November-December 2015 at a six-year low, but the murder rate when the BJP was in government (in 2010-12) was higher.

Perhaps Lalu Yadav should level the charge of “Jungle Raj” at the BJP instead.