After the furore over the Modi government imposing President’s Rule in Congress-ruled Arunachal Pradesh and Uttarakhand  — in seeming defiance of the Supreme Court’s 1994 Bommai judgement — supporters have pointed out that previous governments have used Article 356 more frequently to remove state governments:

There are two obvious problems with this line of argument:

So how to evaluate Modi’s record?

Here we look at 113 cases of President’s Rule since 1950 (drawn from a very useful data set put together by The Hindu’s Rukmini S and Samarth Bansal), and divide them into three categories: routine, controversial and for reasons of law and order. Note that the “controversial” category casts a wide net, and includes many instances that the 1988 Sarkaria Commission (PDF) report disapproved of on procedural grounds, even where no injustice was apparent (viz. categories A, B and C from Chapter 6).

President’s Rule was most frequently invoked between the late 1960s and early 1980s, a period of political churn. The leader of the pack turns out to be the Janata Party government, which in only three years racked up the same tally as Indira Gandhi did in her first 11 years in office (1966-77). The most egregious misuse of Article 356 occurred on 30 Apr 1977 when the Janata Party dismissed nine Congress state governments, well, just — because. This fact should give pause to those who think that strong central parties are mostly to blame for the abuse of Article 356. Indira Gandhi paid her opponents back in the same coin when she returned to power and dismissed nine opposition-ruled states on 17 Feb 1980.

The misuse of Article 356 declined considerably after that, averaging between zero and three “controversial” invocations per prime ministerial term. One reason was the Bommai judgement, which laid down the conditions under which Article 356 could be invoked, such as requiring a governor to carry out a floor test to ascertain the support of a state government.

That said, a crude count gives us limited information. Remember that the 1977-80 Janata government equalled Indira Gandhi’s record in about a quarter of the time she had taken. Controlling for the length of a government’s tenure, we find a starker pattern:

Turns out that shorter, less secure governments have a greater propensity to misuse President’s Rule. Atal Bihari Vajpayee, Manmohan Singh and PV Narasimha Rao were most cautious, at least in part because of the restraining effect of the Bommai judgement: Rao never invoked Article 356 after that.

It’s too soon to make a definitive evaluation of Modi, since he has completed less than two of his five years in office, but his absolute count is already ahead of both Vajpayee’s and Singh’s. Modi’s relative count is a fairly high 1.1 — about the same as HD Deve Gowda and ten times Singh’s — owing to his still-brief tenure. This number could decline to a more reasonable 0.4 if Modi stops here — the same level as Rao and a tad above Nehru’s. But if he continues along this path, placing states like Manipur under President’s Rule, then all bets will be off.

Next, let’s look at the subset of controversial cases in which a governor controlled by a ruling party is making decisions that could result in a different political party either retaining or losing power, as is currently the case in Arunachal Pradesh and Uttarakhand. While the Sarkaria Commission frowned on the tendency of governments to use Article 356 to bring their own state parties into line, it seems more problematic to use it to remove opposition parties.

And how do various governments fare in this regard? 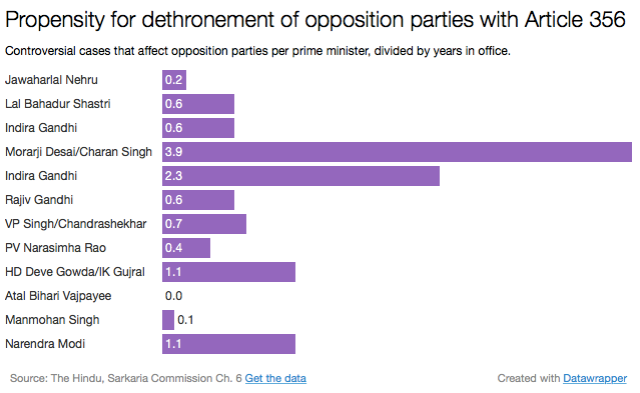 Modi is now doing even worse than Indira Gandhi did in her first stretch in power. This is also an artefact of his brief tenure so far in office, and Modi’s score could drop to a more reassuring 0.4 — the same as Rao’s — if no more opposition state governments are destabilised using Article 356.

Now it’s entirely possible that you consider the analysis presented here to be bunkum, or an effort to tar Modi or to bolster the opposition. The good news, dear reader, is that you can simply ignore my categorisations and focus on the pooled President’s Rule data. And this is what we find:

Doesn’t look good for Modi — he is now the leading imposer of Article 356 in two decades, and within striking range of both of Indira Gandhi’s terms. Once again, this holds true of this first two years, and could drop to 1.0 if he stops here. The nation is watching Modiji.

If you’re still a sceptic, here’s the raw data used (let me know if you have any constructive suggestions):

Note that court judgements are treated here as definitive: this means that some controversial instances of President’s Rule, such as the removal of BJP governments in Himachal Pradesh, Madhya Pradesh and Rajasthan in the wake of the 1993 Babri Masjid demolition, are coded under “law and order”. Conversely, cases like Bihar (2005), found by the courts to be unconstitutional, are coded as “controversial” even if it was seems unlikely that a stable government would have emerged out of a floor test.

2 thoughts on “The use and abuse of President’s Rule”