As counting day on 11 March approaches, it seems as difficult as ever to gauge which way the political wind in Uttar Pradesh (UP) is blowing. Even before the campaign began, pre-election opinion polls offered little help, showing the Bharatiya Janata Party (BJP) and the Samajwadi Party (SP)-Congress alliance neck and neck, with the Bahujan Samaj Party (BSP) lagging. 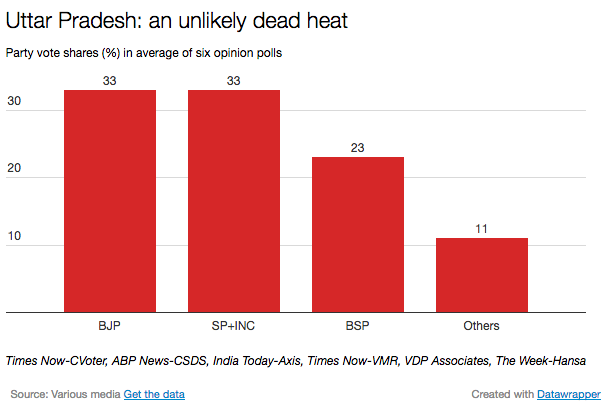 We know from elections in Delhi (2015), Bihar (2015) and West Bengal (2016) that a dead heat in pre-election polls is almost never a good predictor of the eventual outcome.

So what are the BJP’s chances of pulling off a win? If the starting point is the BJP’s historic 2014 victory, its lead seems unassailable. The BJP won 328 of 403 assembly segments, including 253 with more than 40% of the vote, and as Praveen Chakravarty states, for it to win fewer than 200 seats even if “two of the opposition parties get together, the BJP would still have to lose more than 10% of its voters”.

But if the baseline is the 2012 state election, the SP-Congress alliance begins to look formidable. As Karthik Sashidhar writes: “it will take a 7 percentage point swing from the 2012 elections to pull the Samajwadi Party-Congress alliance below the halfway mark”. While this sounds big, it is well within the realm of possibility: in 2014, the SP dropped seven percentage points from its 2012 tally, giving the BJP a sweep in that four-cornered contest.

So which is it? The opinion poll numbers suggest that 2014 is, in fact, the appropriate baseline: 33% represents a near doubling of the BJP vote in the past three state elections and a decisive break from UP’s two-party dominant system. Yet it is undeniable that the SP-Congress alliance has raised the threshold of votes any party needs to attain a majority, transforming the contest from a seeming BJP walkover to a tough fight.

One way to resolve this impasse is to look at UP by-elections. Since the 2014 general election, the state has had 18 assembly by-elections: 11 in 2014, two in 2015 and five in 2016. These constituencies are fairly representative of the state: they are distributed across UP, and their combined 2014 general election vote shares approximate how the whole state voted in 2014, albeit with a slight bias of 3-4 percentage points each towards the BJP and INC (see table below). 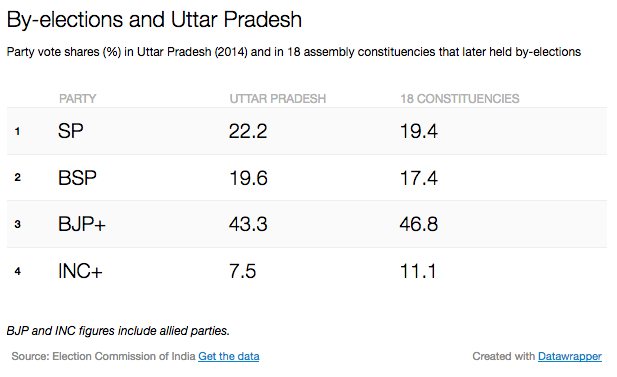 And this is how those 18 constituencies’ votes moved, from 2012 to 2014 to the subsequent by-elections: 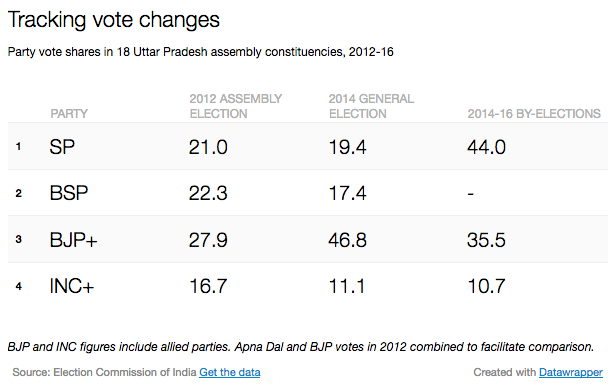 Note that the BJP’s vote share fell about 11 percentage points in the by-elections, while that of the SP rose more than 24 percentage points. The BJP retained only three of the 14 assembly constituencies in which it had a lead in 2014, and lost 11 to the SP. That’s a sharp fall in votes compared with 2014.

There are two obvious caveats. One is that ruling parties tend to do very well in by-elections. Voters calculate that having a ruling party legislator is more beneficial for their constituency, and parties in power tend to win by-elections about 2/3rds of the time. The second is that the BSP does not generally contest by-elections, so the 2014-16 numbers aren’t strictly comparable to 2012 and 2014 when the BSP was in the fray.

But that’s also the bad news for the BJP. One reason it did very well in the general election is that many BSP voters – including Dalits and MBCs – preferred Modi in 2014. But in the subsequent by-elections, the BSP’s vote appears to have gravitated towards the SP rather than to the BJP. It’s possible that incumbent advantage, including control of the state’s law-and-order machinery, contributed to this shift, but the BJP will have to fight to retain its 2014 voting bloc.

Such big drops in vote share are not unheard of in the wake of “wave” elections, such as in 1984. In November that year, the INC won 51% of votes in Uttar Pradesh, only to slip three months later to 39% in the state election that followed. Even bigger dips have occurred: in 1987, the INC won 29% in Haryana, a sharp drop from the 55% it received in 1984.

Now 1984 was a long time ago, and the obvious counter-argument is that UP has seen many big political events since the by-elections that could put wind beneath the BJP’s wings. These include the army raid across the Line-of-Control, demonetisation, the civil war in the SP and the high-pitched election campaign in which the BJP has brought out its big guns. And voters could decide that the BJP deserves a chance to run UP after successive BSP and SP governments.

But the reality is that the BJP’s vote share has dropped substantially since its 2014 victory, and the SP-Congress alliance has built a vote chest that makes it imperative for the BJP to outperform. As it happens, in the 2015 Bihar election, by-election vote shifts overstated the ruling alliance’s vote share but captured the drop in the vote share of the BJP and its allies. The BJP should hope that it won’t be the same story in UP.

2 thoughts on “Uttar Pradesh is the BJP’s to lose. Or is it?”