An Economic Times (ET) report on 26 Apr credited the newly elected Bharatiya Janata Party government in Uttar Pradesh (UP) for a dramatic turnaround in the state’s electricity situation. The news report claimed that UP had “shed blackouts within a month of the BJP taking over the reins, moving from perennially running short of electricity to ‘zero-shortage’ in April”.

It is certainly true that UP’s energy deficit (measured in million units) hit a record low in Mar 2017 of 0.2%, compared to a much bigger gap of 10.5% a year ago in Mar 2016. However, it would be ridiculous to give the new government credit for this improvement: the UP election results were declared on 11 Mar, and a new government sworn in on 19 Mar.

The ET article cited unpublished data from the National Load Despatch Centre, which oversees the national electricity grid, to show that this improvement continued into April, but we’ll have to wait for numbers from the Central Electricity Authority to get a clearer idea.

But regardless of how April turns out, the ET claim completely elides the fact that power shortages in UP, and indeed all over India, have strongly diminished over the past year, as this chart vividly shows:

India’s energy deficit fell sharply in the first half of 2016, and particularly so in UP. UP’s deficit (shown here as a 3-month moving average) converged with north India’s around Sep 2016, and by Dec 2016 had fallen below that level. This was unanticipated: the Central Electricity Authority’s 2016-17 Load Generation Balance Report had anticipated that UP would have an energy deficit of 6.5%, but it turned out to be only 1.7%. Since the BJP ran the state only 13 of those 365 days, the decline in UP’s power shortage had little to do with it, Goyal’s celebration notwithstanding.

Even so, fewer blackouts and less load shedding can only be good news, right?

Yes and no. As much as India’s power capacity has risen in recent years, it is more weak growth in demand that accounts for the disappearance of India’s once-chronic electricity shortages (see chart below): 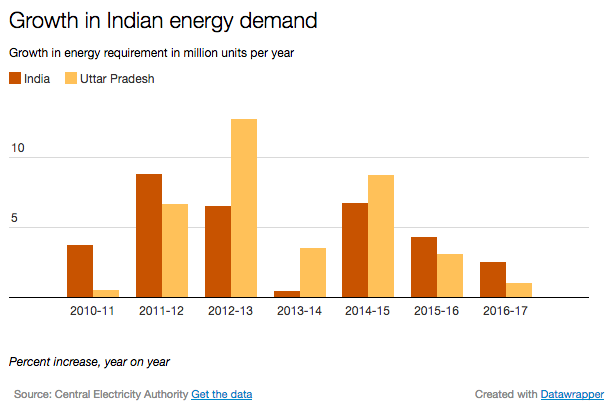 The chart above shows a steady decline in the growth of energy demand since 2014-15, both in UP and in India. This doesn’t have to be a bad thing; many economies display lower energy intensity as they grow, and technological advances could also play a role. Consider the UJALA scheme to promote energy-efficient LED bulbs: government claims likely overstate the energy savings by a factor of two (see Why you shouldn’t be bedazzled by Modi’s LED claims), but their adoption probably shaved a percentage point off 2016-17 energy demand. However, if the decline in demand reflects industrial weakness, and the lingering effects of demonetization, that would be an unhealthy sign. And the rapid decline in the growth rate of energy demand in the past two years is worrying.

Either way, one thing is clear: the ending of UP’s power shortage is part of a broader structural story that has little to do with the new UP state government. And no amount of PR claims dressed up as news reports can change this reality.

(This article was originally published in The Quint.)

6 thoughts on “Spinning an electricity turnaround in Uttar Pradesh”