How can Modi be beaten in 2019? Following the Bharatiya Janata Party’s byelection reverses last week, the consensus in the commentariat clearly leans towards a grand alliance (or mahagathbandhan) of opposition parties of the sort that humbled BJP in Bihar in 2015 and in three recent Uttar Pradesh parliamentary byelections. The subtext is that an “arrogant” Indian National Congress should be more generous towards regional parties, possibly even putting forward a non-Congress candidate as prime minister to cement a grand alliance.

But is it valid to extrapolate from parliamentary bypolls to national politics? Gilles Verniers and Rajkamal Singh argue not, saying “bypolls do not have a predictive value for the following state or general election” and that they reflect mostly local factors, such as the interplay among influential political families in Kairana. There does seem to be some truth to this — the United Progressive Alliance won 6 of 12 bypolls in 2012 and 2013 and the simple average of its vote rose 2 percentage points vis-à-vis the 2009 general election. Yet it was routed in 2014.

If you look closely at parliamentary – as opposed to state – byelections though (see charts below), there does seem to be a correlation in terms of vote swing between how the UPA did in the by-elections and in the subsequent general election. The simple average of the vote swing away from the UPA in the seats that had byelections is similar to the national swing in 2014, implying that they may have been representative of the national picture. 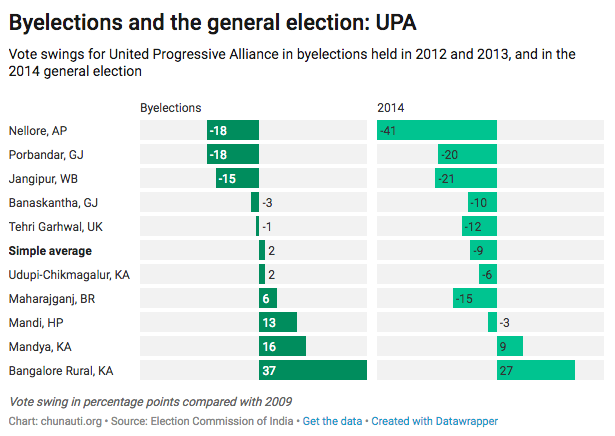 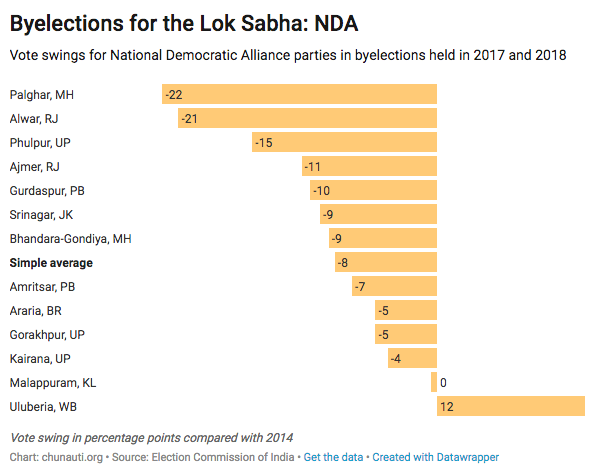 It is striking how poorly the BJP has done in comparison with the UPA, winning only one of the 13 seats that had parliamentary byelections in 2017 and 2018. It seems difficult to imagine the BJP reversing all of the ground it has ceded in those seats between now and 2019. Rajasthan, Uttar Pradesh and Maharashtra are all states that were central to Modi’s 2014 victory. It might be challenging for the BJP to make up these losses with evident gains in eastern states such as West Bengal. There is reason for the BJP to worry.

Do the byelection results support the proposition that the opposition cannot win in 2019 without a mahagathbandhan? Not really. Of the 15 seats that just had elections, only four were won by an opposition grand alliance. Non-BJP parties won three seats fighting alone and another five were won by longstanding state alliances in Bihar (RJD-Congress) and Maharashtra (Congress-NCP).

The case for a mahagathbandhan is obviously strongest in Uttar Pradesh. The BJP remains ahead of the Samajwadi Party and Bahujan Samaj Party individually by quite a margin. It suffered a major vote erosion only in Phulpur; in Gorakhpur and in Kairana it slipped but still polled strongly in the high 40s.

That doesn’t mean that a grand alliance is the answer everywhere. The BJP and its allies rule 12 of India’s 20 biggest states, and the INC is in a position to defeat it – either singly or with its existing allies – in all but Uttar Pradesh. The one ally that could make a difference is the BSP whose vote base overlaps with that of the Congress, as in Madhya Pradesh where an alliance seems to be in the works. In a close election, the addition of the BSP vote could make the difference between victory and defeat in Chhattisgarh, Madhya Pradesh and Rajasthan, states that contributed 62 of 65 seats to the BJP in 2014 and will hold elections in a few months.

Whether Mayawati is amenable to a broader alliance, and on what terms, remains to be seen. It is often said that the BSP suffers because allied parties do not transfer their votes even as they they benefit from the BSP’s vote bank. However this does not appear to be the case in the BSP’s biggest alliances. In 1993 and 1996, the BSP allied with the SP and the INC respectively in the Uttar Pradesh state elections. The BSP’s vote share in the seats it contested was only about percentage point lower than its partners’, suggesting that a smooth transfer of votes occurred.

To sum up, the BJP is facing a serious erosion of votes that is making the 2019 election much more competitive than in 2014. But with the exception of Uttar Pradesh and Karnataka, the results suggest that the INC should be judicious about ceding ground to potential allies rather than rushing into a mahagathbandhan. In 2004 and 2009, the INC became the single-largest party by winning 35% and 47% of the 417 and 440 seats it had contested respectively. If the party cedes more space to a mahagathbandhan and ends up contesting, say, 300 seats, it will be difficult for it to come close to the 150 mark needed to block the BJP’s claims and to form a stable coalition.