In a 13 Feb 2016 speech at the recent Make in India jamboree in Mumbai, Prime Minister Narendra Modi took credit for many economic achievements. These included India’s climb in various World Bank and UN indices, and all-time records in coal and vehicle production, software exports and cargo handling by ports.

The claims were taken from the BJP’s 31 Jan 2016 press release, which proclaimed that “it is necessary to show the statistics because in the Congress-led UPA-1 & UPA-2 regime, many of these indicators were moving in the opposite direction” and to counter “baseless propaganda and criticism”.

And this is what it had to say:

2015: Year of highest changes, despite all baseless propaganda & criticism of opposition – https://t.co/gfv2jPPXDP pic.twitter.com/JwBJP2g6PG

That’s quite a collection of achievements. The problem with claims of this nature is that there is a good chance — particularly in an economy that’s been among the world’s fastest-growing for a couple of decades — that each year will break some record or the other.

So how to judge? One way is to examine how commonplace these achievements actually are: 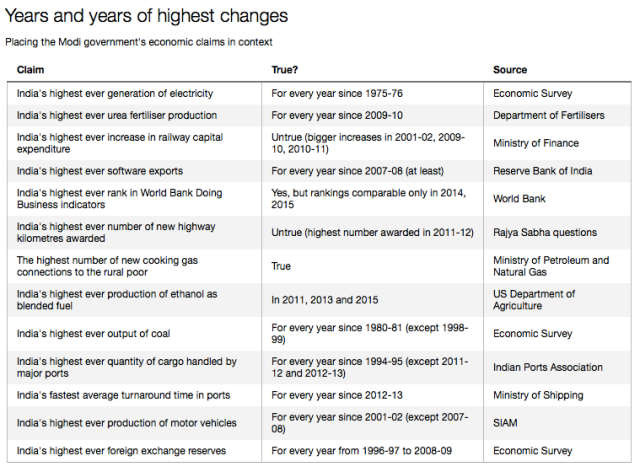 Pretty common, it turns out.

The good news for the BJP is that only two of its 13 claims are outright false. But the fact remains that most of these economic achievements are so much the product of past momentum that the UPA, supposedly paralysed into inaction in its second iteration, could also have made 12 of the 13 claims, one more than the BJP. Even the short-lived United Front government in 1996-97 could have made at least four of these claims without batting an eyelid.

Political parties are entitled to seek credit wherever they can. But the current government’s obsession with topping lists and rankings produces empty claims such as these. Instead, Modi should spend more time listing what he sees as the main hurdles to faster growth, and what he did to fix them.